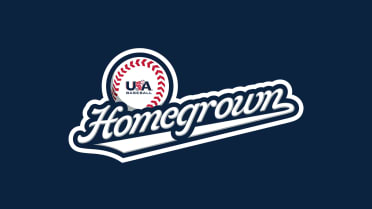 USA Baseball's Homegrown program provides families with elementary-aged youth from across the United States with the unique opportunity to learn from current and former USA Baseball national team athletes, as well as current and former Major League Baseball players alike, in a fun and interactive community-based setting. This program will allow these hometown heroes the opportunity to share their experiences playing For Glory with the many children who may one day hope to be a part of Our Pastime's Future.

Through its two initiatives, the Homegrown Clinics and Homegrown Connections, the Homegrown program allows the Team USA alumni to give back to their hometowns, communities or youth-based organizations that hold personal meaning to them and supported their overall personal or professional development during the course of their careers.

USA Baseball Homegrown Clinics are in-person baseball events for families with elementary-aged youth. Participants will be given a chance to get outside to learn and play America's pastime alongside a Team USA alum.

USA Baseball Homegrown Connections is a virtual, webinar-like experience for families with elementary-aged youth to get the opportunity to meet and connect with USA Baseball alumni from their hometown or community. Students and families with elementary-aged youth will get to know these hometown heroes through a live event that they can participate in from their own homes.

"This event has changed my daughter's mind about baseball. She used to only like basketball but now she likes baseball thanks to this event."

"This was one of the BEST zoom programs that I have participated in, very motivational and organized."

"What a great event. During this pandemic it's nice to see USA Baseball find ways to keep our Youth engaged in Athletics."

“After the event last week, my son went outside and had me pitching snowballs to him. The day after, he set up the garage to be a batting practice area. Today, he asked me if I signed him up for Spring ball yet. He had been opposed until now. Todd Frazer inspired the heck out of him. Thank you so much.”

If you are interested in learning more about the Homegrown program, please contact Anthony Cangelosi, Assistant Director of Youth Programs, at [email protected]

Joe Mauer was a member of Team USA four times throughout his career, having played for the 1999 and 2000 18U National Teams, the 2003 Professional National Team and the 2013 World Baseball Classic team. Mauer was selected with the No. 1 overall pick in the 2001 MLB June Amateur Draft by the Minnesota Twins and spent his entire 15-year Major League career with the club. During that time, he collected a .306 career batting average with 143 home runs and 923 RBIs. He is a six-time MLB All-Star, earned five Silver Slugger Awards, three Gold Gloves, and was named the 2009 American League MVP. A special thank you goes out to Minneapolis Public Schools, St. Paul Public Schools, Cretin-Derham Hall High School, the Boys and Girls Clubs of the Twin Cities, the Gillette Children’s Foundation, the Minnesota Chapter of Hope Kids, the YMCA of the North, the Highland Friendship Club, the Minnesota Sports Federation, the Minnesota Youth Athletic Services, and all the youth baseball and softball organizations that participated in this Homegrown Connection.

Todd Frazier is a two-time USA Baseball alum, having played for the Collegiate National Team in 2006 and the Professional National Team in 2010. In his 10-year Major League Baseball career, Frazier has played for five clubs. He was named an All-Star twice while with the Cincinnati Reds and participated in the Home Run Derby for three consecutive years from 2014-2016, winning the event in 2015. Additionally, Frazier was a member of the 1998 Little League Baseball World Series Championship team from Toms River (N.J.) East American Little League. During the tournament, he went 9-for-15 with 10 RBI, 11 runs scored, and four home runs, including a grand slam. A special thank you goes out to Toms River Regional Schools, the Boys & Girls Clubs of New Jersey, New York City Schools, Ocean County Parks & Rec, Ocean County 4-H Program, Toms River Little League, Toms River EAST Little League, and Little League District 18.

Mychal Givens played for Team USA three times in his career, including winning a gold medal with the 2006 16U National Team. He also played for the 2007 18U National Team and was a member of the 2017 Professional National Team that claimed the U.S.’s first ever World Baseball Classic championship. Drafted in the second round of the 2009 MLB Draft by the Baltimore Orioles, 2021 marks his seventh year in the major leagues. A special thank you goes out to Hillsborough County Public Schools, Pinellas County Schools, the Manatee County School District, Big Brothers, Big Sisters of Tampa Bay, City of Tampa Parks & Recreation, the North Tampa Athletic Association, Florida District 6 Little Leagues, and additional RBI and youth leagues for make this Homegrown Connection a success.

Albert Almora Jr. has played on a USA Baseball national team seven times in his career, starting on the 14U National Team in 2007 and most recently as a member the Professional National Team in 2015. In his Team USA career, he won five gold medals before being drafted in the First Round of the MLB Draft by the Chicago Cubs. In his five-year stint with the Cubs, he won a World Series title in 2016. A special thank you goes out to Miami-Dade Public Schools, The School District of Palm Beach County, Boys and Girls Clubs of Miami-Dade, Hope for Miami, 19 Sports Miami, Miami Youth Baseball Association & South Miami Youth Baseball League and the YMCAs of South Florida for making this Homegrown Connection a success.