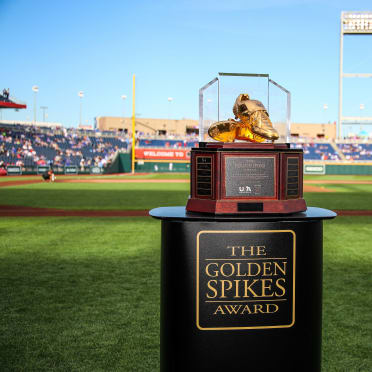 ABOUT THE GOLDEN SPIKES AWARD

Since 1978, USA Baseball has honored the top amateur baseball player in the nation with the Golden Spikes Award. The award is given each year to the player who best exhibits exceptional on-field ability and exemplary sportsmanship.

USA Baseball compiled an initial list of more than 150 candidates for the award prior to the start of the 2023 amateur baseball season. The list is based on preseason recommendations and will also include rolling nominations throughout the regular season to ensure that all players are considered. USA Baseball officials will review this list with the Golden Spikes Award Advisory Board and unveil the 2023 Golden Spikes Award 55-player preseason watch list on February 10.

The finalists will then be announced on Wednesday, June 7, and USA Baseball will send a final ballot to the aforementioned voting body that same day. From June 7–June 12, the voting body members may select one finalist from the ballot to be the Golden Spikes Award winner. Fan voting will reopen simultaneously during this time, and fans will be able to submit up to 25 votes per day for their favorite finalist on GoldenSpikesAward.com. Final selections made by the voting body and fans will again carry a 95% and 5% weight of each player's total votes, respectively.

The 2023 USA Baseball Golden Spikes Award will be presented on Friday, June 23.